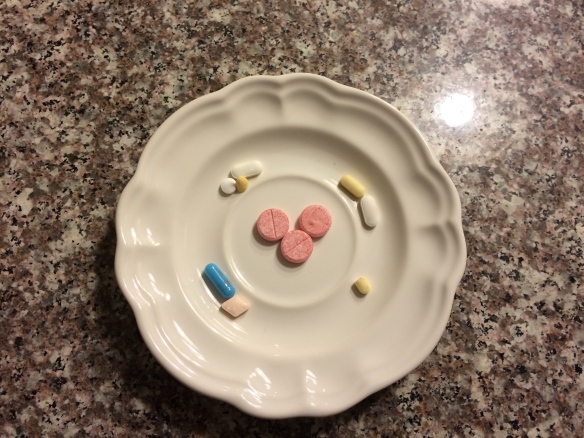 Here’s a snippet of a conversation I had yesterday evening with my little girl.

Her: Daddy, why does F take medicine?

Me: It helps him not feel so sad all the time.

Her: Okay, so why does L take medicine?

Me: It helps her focus in school and not be too worried.

Her: Well, what about C? What does his medicine do?

Me: It helps him keep calm in school and at home.

Her: And what about B? He takes medicine too.

Me: His medicine helps him not get too angry.

Her: So when will I start taking medicine?

With an internal sigh, I brushed off her last question and changed the subject. I didn’t have the heart to tell her that we were going to start her on a drug trial in a couple of weeks—to help her deal with her anxiety. I figured she’d have plenty of time to think about it when the trial actually began. Nor did I tell her that her little brother was going to start his own trial around the same time. Again, the less said, the better.

So there it is. By the middle of May, all six of our children will be on some kind of psychotropic medication.

It’s interesting. I shared this little dialogue with a couple of autism parenting support groups I belong to on Facebook, and I was kind of surprised by some of the comments. Many posted the symbol for a virtual hug: (((you))), and a few said something like “It’s hard” or “So sad.” But my wife, Katie, had the best response: she laughed. It was, after all, a cute exchange, and it showed how innocent our girl is.

It never dawned on me that this conversation would elicit words of sympathy, but now that I see it through these commenters’ eyes, I think I get it. See, I’ve grown so used to our routine that it seems, well, routine to me. I don’t think of it as unusual, hard, or sad at all. In fact, it’s the thought of not medicating my children that fills me with fear and trembling—for my sake as much as for theirs!

An Evolution of Sorts.

It wasn’t always this way. Back in 2007, when our pediatrician first prescribed a medicated patch to help one of our girls with ADHD-like symptoms, I resisted mightily. I hated the idea of introducing mind-altering chemicals into her sweet little brain. It didn’t help that the doctor told us we’d likely need a prescription steroid to help control the skin irritation that often accompanied the patch. Great! A medicine to counteract the side effects of the original medicine. What could be better? Eventually, however, I gave in.

When the patch didn’t work, we began a three-year odyssey of various other trials (under the direction of two different pediatricians and two different psychiatrists) to help her not only with ADHD but her growing anxiety. One made her giddy and made her gain a lot of weight. Another gave her terrifying nightmares. A third got her so agitated that she ended up biting me on the shoulder in the middle of Mass one Sunday. There were other failures as well, but I can’t recall them now.

It wasn’t until we began working with our third psychiatrist that we found the right combination. Her anxiety diminished considerably. She lost the extra weight. Her grades began to soar. And her demeanor at home, while still needing some help, became much more manageable. The tide was turning, and I was happy—happy enough to let three of our other kids begin their own medicine trials. Thanks be to God, there was a lot less initial drama with them and generally positive results.

So now our two youngest ones are on the verge of getting prescriptions. Their therapist tells us that she can do only so much with them as they are right now. The little guy is too hyperactive and the little girl is too nervous for any talk therapy to have a lasting effect. “If we can just take the edge off,” she told us, “we might be able to make some headway. But as it is, the cascade of emotions is too strong for them to work through.”

It was a bitter pill to swallow at first, this thought that all our kids need psychiatric medicines. Not only does it get expensive, but it emphasizes their otherness and the challenges they face. Still, it didn’t take me long to adjust. I’ve been down this road a few times already! Plus, the sheer everyday nature of the routine helps a lot. Maybe that’s why my little girl can be so nonchalant about it. She has seen her siblings take medicine twice a day for as long as she can remember. It’s just a part of who we are and how we live.

That’s probably the way it should be. For everyone. You work and work and work until you find what works for you. You let go of the “picture perfect” life you had envisioned for yourself and your family, and you embrace the beautiful, horrible, glorious, maddening, sanctifying mess that God has given you. And as you do, you find that he’s embracing you as well.