See that picture up there? That’s my boy (fourth child, third son, 11 years old), trying to go to sleep in his new bed in his new bedroom. We moved just about everyone around this past weekend. Usually, I would balk at such a thought—ASD kids have a hard time with transitions. But this was a pretty important move for a couple of reasons that I can’t get into right now.

Anyway, this poor boy was having a hard time with the change. He was excited to be moving to his older brother’s (third child, second son, 13 years old) room. The two of them had been roommates a few years back, and they had a blast together. But once he got into the room, he couldn’t cope. Within five minutes of Katie and me praying over him and giving him a good night kiss, he was back in our room, eyebrows knit, hands wringing, voice aquiver.

The poor kid. He wanted to stay in his room. He so much wanted to do this without any fuss or bother. Plus, he knew he was stuck. Everyone was in their new rooms, and there was no way he could go back to his old one. So he spent a half-hour in our room Saturday night, dialoguing, mostly with himself, about his dilemma.

Katie and I knew it would be too much to “force” him to go to bed. He was too distraught. We took turns helping him reason through why he was having a hard time, and what he could do about it. But if we said just the wrong thing (whatever that was), it would only make him feel worse about himself. In the end, I stopped even trying, and just rubbed his back while he lay on our bed.

Then it occurred to me. His brother is already in the room, watching videos on his iPod Touch. Maybe he can help? So I texted him and asked him to come get his brother and spend some time talking with him in the room so that he could get more comfortable. Then I waited for a reply. 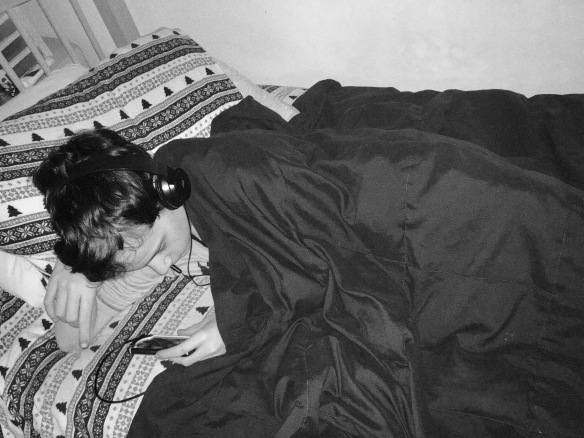 See that boy up there? That’s the older brother, snug in his bed watching videos. I took his younger brother into the room, and asked the older boy to please help him out.

“I know, but do it for your brother. You can see he’s upset.”

“I see that. But I’m not a talker. I don’t know how to have a conversation.”

Part of me actually believed him. He is one of our least social kids. He’s the one who will spend just enough time with his friends at school, but would never even think of inviting even one of them over afterward, let alone during the weekend. “I get just enough at school. I don’t need any more.” Logic, through and through.

But I also knew that a part of him didn’t want to be bothered. It’s not just lack of communication skills—he can be very good when he’s not tired. It’s lack of understanding his brother’s situation. Not callousness. Just not getting it. In addition to being one of our least social, he is also one of our most “mind blind.”

“It’s okay, Dad,” came the younger one’s voice from under his covers. I’m feeling okay now. I don’t know what I was so upset about. This is  fine. You don’t have to convince him any more. You can go back to bed now.”

Just like that. All he needed was to know that someone was looking out for him. He had figured it out, and was ready to step into this new transition.

Now, if I can just figure out how to get his brother to actually, you know, relate to him.

2 thoughts on “The Ballad of the Bedeviling Bedroom”