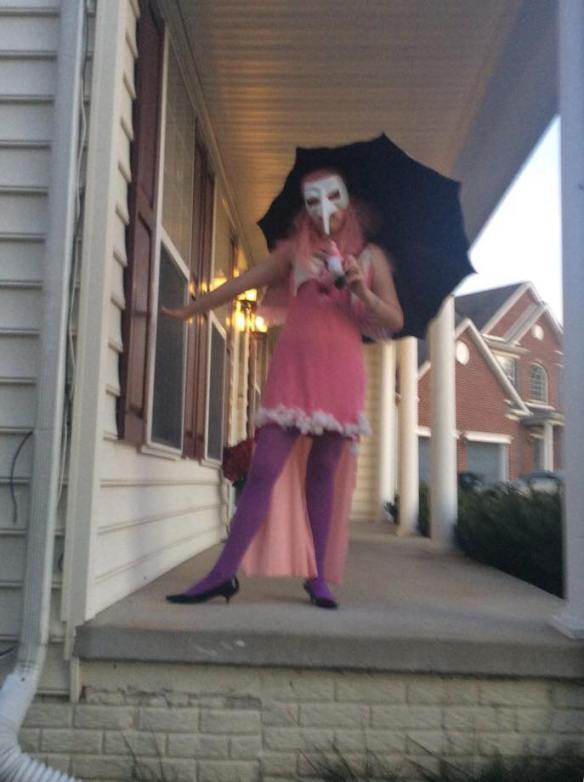 So here we are at Halloween, the second most expensive holiday of the year. Actually, our family has been living this holiday for nearly three months, as our kids usually begin planning for it just as back-to-school shopping begins. One in particular plans for a particular costume, then obsesses over whether it’s the right one, then scraps those plans and comes up with a new one, then obsesses over that one again, until . . . well, you get the picture. It’s not uncommon for people with ASD to get stuck on one thing for days and weeks at a time. It’s a form of perseveration that can lead to anxiety and depression, so we try hard to help the kids keep it to a minimum—with varying degrees of success.

But that’s not the story I want to tell today. I want to tell you about a little walk that one of our daughters took the other day. That’s her in the picture above. She decided to go trick-or-treating as a human version of the Pokémon Spritzi. But as a sort of practice run, and just because she wanted to, she told us that she wanted to walk around the neighborhood this Saturday in her get-up. That’s right, up and down the sidewalks with a mask, umbrella, dressy shoes, and pink dress. In broad daylight. On a regular autumn day. Oh, and she also wanted us to take her downtown so she could walk around Baker Park in full regalia.

Her request confronted us with a question that I suspect many ASD parents face. On the one hand, in defiance of a neurotypical one-size-fits-all world, we encourage our kids to be themselves. There’s no need for them to try to force themselves to be “normal” as general society defines normal. There’s also no need to add to their anxiety or sense of otherness by implying (unintentionally) that they have to hide who they really are.

But on the other hand, we know how odd a human Pokémon can appear to most of our neighbors. We don’t want our kids to be labeled as “weird” or, worse, bullied by neighborhood kids. This daughter, in particular, had some tough experiences in eighth grade, and the memories of it still haunt her two years later.

So that was our quandary: do you protect your kid? Or do you affirm his or her uniqueness and creativity? Do you do your part in helping to change society’s perceptions? Or do you give your kid a lesson on what the real world is like and on how to fit in without compromising themselves? It’s a perpetual balancing act, with no right or wrong answer.

In the end, we didn’t have to give any answer—mercifully. She slipped out on her own in the middle of the afternoon, while I was out running errands and Katie was upstairs cleaning. She had a nice little constitutional around a couple of blocks with hardly a peep from anyone. Just one person on our street made a comment, and even that was mild and jovial.

Still, I’d like to think that whatever choice we made, it would have been made in love and with the best of intentions.

It’s hard sometimes knowing which side to come down on—with this and many other issues. There’s no manual for parenting, and that’s doubly true for ASD parenting. In the neurotypical world, you have the experience and example of the many people who have gone before you or who are walking along the path with you. But ASD parents often find themselves walking by themselves, and on a different path.

I think this is especially true for our generation. Ours is the age of Temple Grandin, Steve Silberman, and Parenthood. Ours is the generation of disability advocacy, the ADA, and IDEA. It’s only in the past decade or so that ASD has become better diagnosed and recognized. So in many ways, we are the trailblazers.

It’s not just in our neighborhoods that we’re blazing trails. Through our advocacy for our kids, we are teaching school administrators and teachers about autism. We are helping our churches learn how to be more welcoming and openhearted. We are making parks and playgrounds more accessible. And we’re doing it not just for our kids, but for the others around us—and even more important, for the next generation.

So keep this in mind, all you special needs parents. Your work is having a far greater effect than you know. Just by walking down the street or into a McDonald’s with your kids, you’re making a huge difference. A trip to the library or a walk in the park means a lot more than exercise for your kids. Every contentious IEP meeting adds another brick in the road toward full inclusion and acceptance. You probably don’t even know that you’re doing it, but you’re blazing a trail just by embracing the family God has given you. You’re paving a way to make a brighter future for everyone—even the human Pokémon among us.