Isn’t this a cool picture? That’s our eight-year-old boy playing Fruit Ninja on the iPad. This is quite a common sight in our home. It’s just one of many contortions this kid does. He’ll fold himself backwards over the back of the sofa. Or he’ll have his legs crossed, yoga-style, and suspended in the air while he rests on his shoulders. Or he’ll curl himself up in a ball, with one leg sticking out at a highly improbable angle. Or a combination of many different poses. He’s never in the same position for more than a couple of minutes.

When he’s not twisted up, he’s like a perpetual motion machine—hopping, dancing, mock-battling, wrestling with his reluctant little sister. Dinner is always difficult for him. He’s usually the first one out of his seat (within three to five minutes), running around or hopping up and down. Even taking a walk can be an exercise (sic) in unique movement. 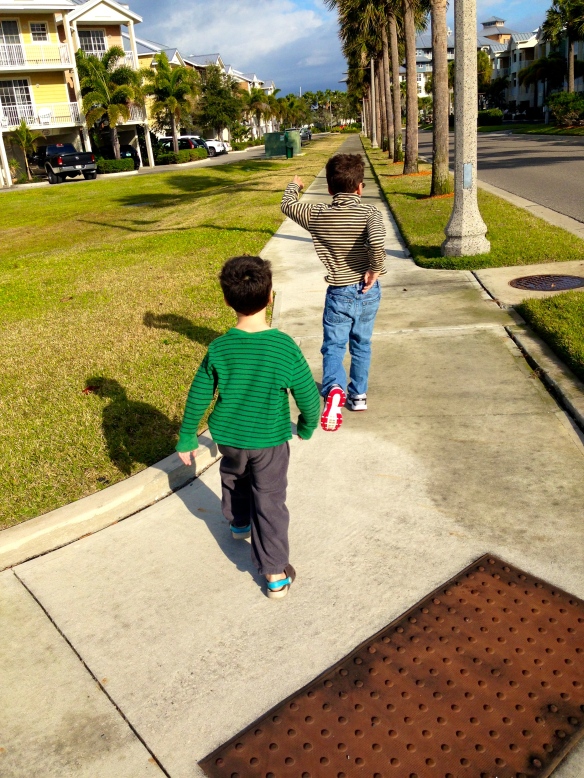 He’s not the only one, either. His next-oldest brother is very much the same way:

Now, this is a marked contrast to his younger brother who will, at odd times, simply plank. 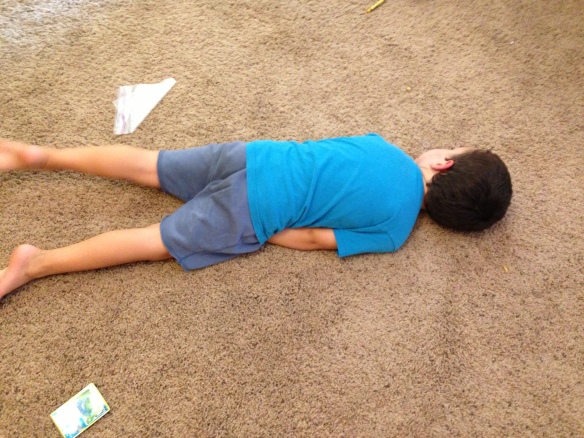 Katie and I think he does this as a coping mechanism when he gets overwhelmed. He just shuts down for a few minutes, presses his internal reset button, and then he’s back at it again. He’s just as hyperactive as his brothers, but he has a different way of dealing with overstimulation.

Funny enough, though, if you put any of these kids in front of a computer on Minecraft, they can sit still, absorbed, for hours. They may be at odd angles again, but they’re still.

So what’s going on?

Katie and I think it’s related to something called Intense World Theory. Pioneered by a pair of neuroscientists in Switzerland, Intense World Theory posits that people with autism are hyper-aware of everything going on around them and within them. ASD folks feel everything so intensely—both physical and emotional—that their attempts to compensate need to be just as intense. It’s like an autistic version of Newton’s Third Law of Motion: For every action, there has to be an equal and opposite reaction.

So our armchair contortionists are merely reacting bodily to the busyness around them and in their minds. Their world is so intense and so full that they react to it in a similarly intense, involved way. Or it’s so intense that they need to shut it out at times, as our little one does, so that they can press their internal Reset button.

This also explains their ability to become so absorbed in the world of video games. It can be very loud and frenetic, but it is also limited and contained. Just a small screen (okay, small-ish) that they can turn on or off. And as noisy as it is, it’s also pretty predictable. So there’s an element of safety and comfort there. Of course, engaging in the virtual world doesn’t really help them get out their pent up energy. It only helps them suppress the need for it and, therefore, suppress their need to (over)react to it.

It’s Just Too Much!

All this can be kind of cute, but there’s another, more troubling, side to it.

Take my oldest son, for instance. He likes to go to Teen Gamers, a monthly gathering of middle- and high-school students hosted by the local library. It’s a place where kids can hang out, play video games, and have pizza, all under adult supervision. I don’t mind that it’s all about video games. Considering his social anxiety, it’s a golden opportunity for him to expand his social circle.

But as much as he enjoys himself there, as soon as he comes home, he hurries up to his bedroom and spends the next couple of hours in virtual seclusion. The same can happen after a long day at school or after we all go somewhere as a family. In fact, after just about any situation where he is out of his comfort zone, the boy high tails it to his room, turns off the lights, and burrows under the covers with his 3DS or his iPod Touch. The outside world is too much for him to handle, and he needs time to decompress.

Something similar happens with my older daughter, although with her, the reaction isn’t always delayed. She is just as likely to melt down right in the middle of a store or restaurant as she is to wait until we get home. That’s why we’ve come to expect her to spend a considerable amount of time in the bathroom at church on Sundays.

That’s how intense the world can be for these two. It can actually hurt to be engaged in it for too long.

I like this explanation a lot. It helps me see that my kids are not being antisocial—at least not on purpose. It also gives me some more insight into the way their brains are wired. And most important, it helps me adjust my plans and expectations.

I know, for instance, not to expect them to be able to handle a marathon day at Disney World. I should be happy to get three hours out of them—and that’s with one or two breaks so they can regroup. It also helps me understand what school is like for them. They spend six hours trying to maintain an ordered exterior while everything around them (and within them) feels like it’s set on overdrive. Of course they’re going to need some serious decompression when they come home—whether that means time on the trampoline or some mini-hibernation. There’s no way we should expect them to do anything productive like homework right away. And on days when there’s a lot of homework, we know we need to break it up into smaller chunks—or tell their teachers that they’ll finish it the next day.

Now, I know that they can’t expect this to go on forever. They’re going to have to find other ways to cope when things get too rough. There aren’t too many workplaces that have yoga mats or dimly-lit quiet rooms for decompression. And God help you if you take too many breaks! So we are trying to teach them how to increase their tolerance and find other, less obvious, ways to deal with all that frustration and overstimulation. It’s all part of living with ASD. They’re not being silly or stubborn or sullen. They’re just trying to survive.

3 thoughts on “Dude, That’s So Intense”