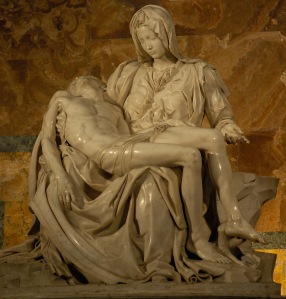 So here we are in the middle of another Holy Week—the seven days between Palm Sunday and Easter. This is the time when Christians pay especially close attention to the stories of Jesus’ arrest, crucifixion, and resurrection. And as you might expect, believers conjure up beloved images during this time—images drawn from the Stations of the Cross or from a classic movie like The Ten Commandments or Jesus of Nazareth.

My favorite image, however, is a little different. I tend to think about Jesus’ mother, Mary, and especially that moment after the crucifixion that has been called the Pietà. See that picture up there? It’s Michelangelo’s rendering of the scene, and it’s on display in St. Peter’s Basilican in the Vatican.

Anyway, the Pietà wasn’t always my go-to Holy Week image—at least not until something happened about four years ago. And since it’s Holy Week, I thought I’d share the story.

It had been a long evening—and it was only 6:30. Our second child had been fighting Katie over homework, fighting her older brother over the use of the TV, and fighting me over whether she was going to eat her dinner or just sit at the table and wail.

She was nine years old at the time: a very pretty girl with big, ice-blue eyes; light brown hair with natural blonde highligts; and a fair face with a few freckles. When she’s not throwing a tantrum, she has a lively sense of humor and an innocent, even sweet disposition.

She also has Asperger Syndrome. Among other things, this means that her brain has a difficult time processing all the visual and auditory input that we neurotypical people take for granted. So after a full day dealing with the sights and sounds of school, she has had just about as much as she can handle. She spends six hours every day holding it all in, and it’s only when she gets home that she feels safe enough to let it out. And that’s precisely what happened this evening.

So there I was, taking my daughter from the dinner table and escorting her to her room—again. “Maybe if I sit with her for a few moments,” I thought, “she’ll be able to calm down.” So up the stairs we went, me tugging her as she reluctantly followed, crying and swatting at me. I sat down on her bed, held her in my lap, and tried to speak in soothing tones while she shook and wept. But it was no use. She just kept pitching back and forth, wailing and screaming until she fell asleep in my arms.

I was lucky that night: she fell asleep quickly enough for me to make it to the prayer meeting I had been attending. It took place in the chapel of a large Catholic church. The chapel was dedicated to Mary, and it featured a series of stained-glass windows depicting various scenes from the Virgin’s life.

I got there a few minutes early, tied up in knots and on the brink of tears. Since only a few people had arrived, I found a quiet corner and knelt down for some private prayer.

As I bowed my head and shut my eyes tight, a host of anxious thoughts swirled in my mind. What was going to happen to my little girl? Would we ever find the right therapies and medications? How could Katie and I keep up? What about our five other children, all of whom are also on the autism spectrum?

But then I looked up, I saw that I had stationed myself right next to the stained-glass window depicting the Pietà. I saw Mary, a look of both resignation and surrender on her face as she cradled the lifeless body of her son, the image pierced my heart. I had just come from cradling the seemingly lifeless body of my child, and here was Mary doing the same thing.

It was a moment of recognition and revelation. My reaction to my girl’s suffering was tinged with bitterness, but so was Mary’s. Looking at her face, I could tell that she didn’t just shrug off what had happened with a sense of holy indifference. She was a real mother holding her own flesh and blood. As I kept looking at the image, I imagined Mary telling me, “It hurts, doesn’t it? It really hurts. I don’t have comforting words to offer you, except to say that I know how bitter it is—because I’ve tasted it. Does that help?”

In that moment, I felt a sense of kinship with Mary that I still have a hard time putting into words. The best I could come up with was a diptych, a kind of two-paneled painting. On one panel, I imagined myself holding one of my children, much the way that Mary holds Jesus in the Pietà. As I contemplate this panel, I realize that, just like Mary, I too am sharing in my children’s pain and frustration and anguish. When melt downs like my little girl’s happen, I am just as helpless as Mary was, and the best I can do is keep vigil with them and pray for God’s strength to keep moving forward.

On the other panel, I see myself as the lifeless body, spent and exhausted, lying in Mary’s lap. I have given all I have to give, I have done all that I know how to do, and there’s nothing left. But Mary is there, accepting my pain, sadness, and helplessness as her own and ennobling it by turning it into a prayer that we offer to God together.

I realized that night that this is an okay place to be. If Mary is with me, I know I’ll find some kind of resurrection, some kind of divine grace to help me get up and take the next step. I saw that it’s okay to collapse upon occasion; someone will always be with me until I can rise again.

Rising to the Challenge.

What I learned—what I felt—as I looked at that stained glass window has stayed with me. My little girl is not so little any more. Her melt downs may not be as dramatic, but her challenges have become more complex. So too have our other kids’ challenges, melt downs, and rough patches. Frankly, a day doesn’t go by that I don’t get the chance to identify with one or another—or both—of those pictures on my diptych. And that’s a good thing. Because I don’t know what I’d do without them.

I hope you have a happy Easter.

3 thoughts on “An Inspired Diptych”

Leave a Reply to Regina B. Valencia Cancel reply