It took me a couple of days to find it, but here it is: the Vatican’s message to families touched by autism. On every April 2, World Autism Awareness Day, the Pontifical Council for Healthcare Workers publishes something like this. On one hand, we can read these official statements as little more than that—official, almost boilerplate language that can be applied to any other disability. All you have to do is swap out “autism” with “cerebral palsy” or “depression” or some other brain disorder. Or we can read these messages as words from the heart, intended to offer something personal to the ones affected by this disorder.

I choose the second option. And not just because I happen to be a Catholic. When I read Archbishop Zimowski’s words, I saw that he really does get some of the challenges of ASD and of having a child on the spectrum.

For one thing, he spoke of the feeling of “loss,” but also of “amazement,” that parents of ASD children can experience. And that strikes me as right. Hearing the diagnoses for my kids—one after another after another—was like a stab in the heart each time. Especially when we got the news the first time, I was stunned. “Loss” was definitely the first thing I felt. The sense that this beautiful son of ours had lost his future. The sense that my wife and I had lost any hope for having a full relationship with him. The fear that he would lose any opportunity for an independent life. And, yes, the fear that we had lost our future as a happily retired couple with no worries about our grown children.

But at the same time, there was a sense of amazement. It didn’t happen all at once. But over the next few days, as I got used to the word “autism,” I was amazed at how beautiful, loving, and genuinely happy my boy was. (Mind you, he was only three years old at the time, and every kid at that age is really cute. But still. . .) I was amazed at how much more my heart went out to him. I was amazed at how deeply he could respond to me, even though he had yet to speak a word and at times appeared lost in his own world. I was amazed that, even in the midst of my loss, I never thought it was completely hopeless. Somehow I knew that God had our boy in his hands and that a path would open up before him over time. And slowly, through therapy, our own understanding and advocacy, and a growing awareness about ASD in the broader world, I am beginning to see this path—for him as well as for his other ASD siblings. Finally, and most important, I am amazed at how much these kids show us the face of Christ.

The other thing that Archbishop Zimowski speaks about is the sense of solidarity that the Church feels with people on the autism spectrum and their families. It’s a pledge to walk with us, alongside of us as brothers and sisters. Not in a patronizing, pitying way but as our peers who see the value, the beauty, and the vital role of those struggling with this disorder. This, I think, is one of the greatest gifts that the Church can give to families like ours. In a world that tends to assess people’s worth based on their material contribution to society, the Church is telling us that our kids offer something just as important, if not more so. I wrote about this just a few days ago, and it has been sticking in my mind ever since.

The good archbishop knows he cannot offer expert help. He knows he doesn’t understand our challenges half as clearly as we parents do. But he also knows that we don’t expect that from him, or from the Church as a whole. We’ll find the experts elsewhere. We’ll find the clinical help we need from, well, clinicians, not priests or bishops. As Peter told the lame man, “Silver and gold I do not have, but what I have I give to you: In the name of Jesus, stand and walk.”

We may not find therapy in the Church, but we will find acceptance. We know we will find people who can see our kids in the same way they see every other child: as a gift and a mystery. Of course, this doesn’t always happen. No parish is perfect, after all. But that’s what makes these words so much sweeter. We know we belong. We have the words to prove it. And we have the Spirit behind the words to remind us whenever we feel otherwise. 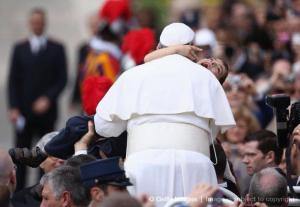 Just this morning, I came across a story written by Paul Gondreau, a theology professor at Providence College in Rhode Island. He and his family happened to be in St. Peter’s Square in Rome on Easter Sunday and were present when Pope Francis toured the Square in his popemobile. The picture you see here is of the pope embracing Gondreau’s eight-year-old son, Dominic, who has Cerebral Palsy.

It was a moving sight, and it made its way to the Internet and numerous news outlets around the world. (Not unlike his first popemobile ride, when he also had the car stopped so that he could give a special embrace to a disabled man in the crowd.)

In so many ways, the picture speaks for itself. But Gondreau’s brief article on the event makes a couple of moving and important points.

First, he relates a comment that a woman in the Square made to his wife afterward: “You know, your son is here to show people how to love.” Gondreau talks about how this comment turns our everyday thinking on its head. Parents of children with disabilities are called to give more than the usual amount to their kids: more help, more guidance, more advocacy, more money, more time, more therapy, more of everything. And we often focus on all that we have to do or all that we have to give. But what Pope Francis highlighted—and what Gondreau picked up on—was how much our children give to us. While we’re busy giving our children all they need, they are busy giving us huge lessons in what it means to love. They’re teaching us how to give and give and give—not by demanding it of us but by drawing it out of us. Just as Jesus gave himself for us not because we stormed heaven and demanded our rights but because his heart warmed at the sight of us, and he couldn’t help but become one of us and share in our pain and need.

Second, by framing the whole thing in terms of a vocation, Gondreau finds a way to answer the “why” question that every parent of a special-needs kid asks. Why did this happen? Why him and not someone else? What did he (or we) do to deserve this? In my very first post on this blog, I wrote that asking “how” is far more helpful than asking “why.” Well, I’m not so sure any more. I think you need to be working on the “why” if you want to know “how.” And to say that it happened because God wanted more professors in the art of love is clearly one very encouraging, hope-filled answer.

Of course, that raises the possibility that God actually gave your child autism or cerebral palsy or some other genetic disorder. In fact, it almost pushes you toward that kind of conclusion. I don’t want to get into that really thorny question here (perhaps later), but my own experience tells me that when I look upon my kids—specifically with their challenges and disabilities—as God’s gracious gift to me and to the world, my heart softens. I find more patience, more peace, and a renewed willingness to fight for them. I find myself, too, looking upon other people—especially those who don’t get my kids—with more kindness and compassion. Bitterness recedes, and fear diminishes. Hope grows, along with a little more wisdom and clarity on how to proceed through each challenge that we face.

Early in his article, Gondreau referred to Mother Teresa of Calcutta, who talked about performing “small acts with great love.” That’s one way into this vocation. But I like another saying of hers even more. She called it the “Five-Fingered Gospel.” Carefully counting out each finger on one hand, Mother Teresa would tell people, “You. Did. It. To. Me.” Everything we do, especially for the poorest and most vulnerable and most needy among us, we are doing to Jesus. She spoke often of meeting Jesus “in the distressing disguise of the poor.” For her, that was the heart of the Christian message, and I’m beginning to agree with her. I can’t tell you how helpful it is to know that in caring for my kids, especially in the midst of a huge melt-down or in some other difficult moment, I have the privilege of meeting almighty God. If my heart is right and my mind is clear, I imagine myself caring for Jesus at that moment, just as people in the gospels washed his feet; wrapped him in swaddling clothes; and took his exhausted, wearied body down from the cross and laid it in his mother’s lap.

None of this diminishes the pain and the difficulties, of course. But maybe it will help us learn how to love and accept the situations we are in rather than try to run and hide from them or get swallowed up in anxiety or anger. Imagine the kind of world it would be if the least and the most challenged among us were treated as gifts and not glitches—as prophets and not problems.